Ron Patel Has a Plan for the Toros 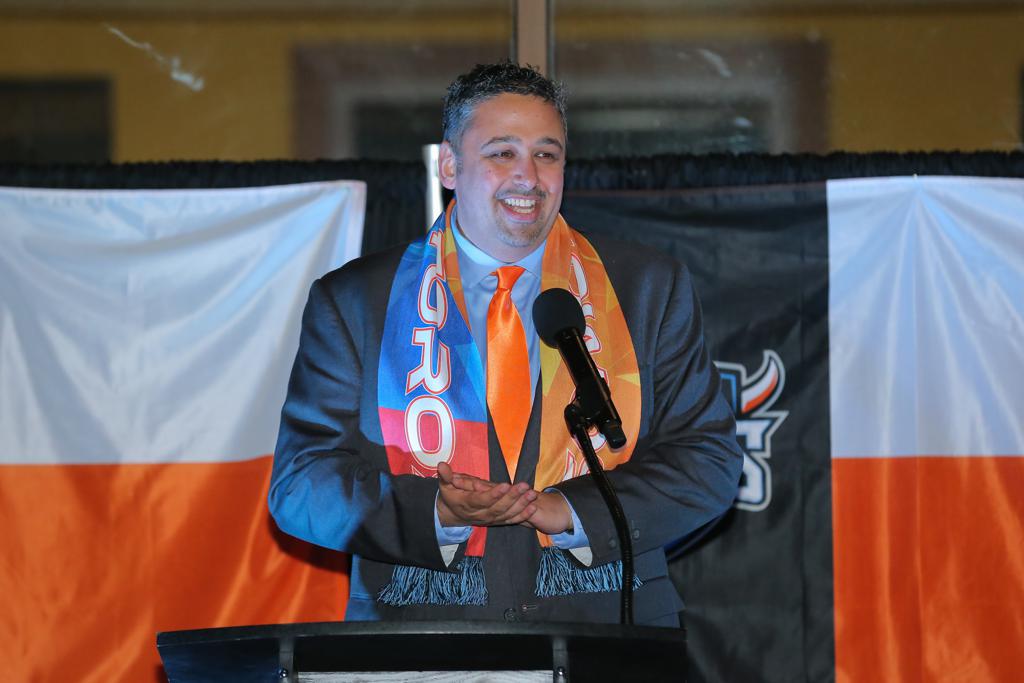 EDINBURG, Texas – In the year since he became President of the USL Championship’s Rio Grande Valley FC, Ron Patel has worked to understand what makes the people in the four counties across the region tick.

What he’s found is a geographically connected community that experience highs and lows, good times and bad – but always come together in celebration of one another.

“Just like in any large family, you’ve got people who will fight all the time and they butt heads,” Patel said recently. “Then what will happen is one of them will fall on the ground and they’ll all rush over to pick that person up. Then when one person does something extraordinary, they all sing from the rooftops about their cousin, or their aunt or their nephew or niece that did something extraordinary.

“The Valley’s just like that. The Valley’s got all these different cities and High Schools that all fight with each other and say, ‘we’re going to beat you, we’re better than you.’ We’ve got the city of this versus the city of that, but as soon as someone does something really, really good, they all rally together. As soon as someone falls on the ground, they all rush to pick them up. That’s what I’ve noticed about this place. It’s really beautiful to see.”

It's also one of the reasons why Patel – who prior to joining RGVFC helped launch New Mexico United as the club’s Chief Revenue Officer – believes the future of the Toros could be among the brightest of any club in the Championship.

In December, the club announced a restructuring of its partnership agreement with Major League Soccer’s Houston Dynamo, bringing technical independence for the first time. With that, the Toros are now set for a new era, where competing for postseason berths, silverware and glory is the expectation.

That’s the message Patel is now driving across the region, with the promise that Toros 2.0 will bring the level of action and competition the Rio Grande Valley’s fans demand.

“I think the biggest challenge is there’s already a perception of the brand,” Patel said. “In New Mexico, it was a fresh brand and we had the chance to initiate people’s perception of it while there already is a perception here. We’ve got a very soccer-savvy marketplace. They know their football down here, so you’re never going to fool anybody, and you can’t say things unless you’re going to back them up with actions. That could be on the field, it could be in the community, it could be online, it could be a bit of everything, so unless we back up our words with our actions, we’re never going to get anywhere.

“Right now, everyone here has their preconceived notion of what the Toros are, so it’s on us to communicate, ‘look, this is different now.’”

The goal for Patel, of course, is to achieve with the Toros what he and the leadership accomplished with the launch of New Mexico United. Professional soccer’s arrival in the Land of Enchantment has proven a roaring success, with the club posting the highest average attendance in the Championship in its inaugural season in 2019 and maintaining high levels of engagement throughout a 2020 campaign that saw it play all its contest outside the state due to pandemic protocols.

But for Patel, it’s not as simple as just taking what worked in New Mexico and applying it directly to the Rio Grande Valley.

“There’s challenges in the state. Often in New Mexico we would often come up on top of the bad lists and bottom of the good, and people develop a chip on their shoulder in New Mexico. … I think New Mexicans, they didn’t know they needed New Mexico United until New Mexico United was right there in front of them, and then it was an outlet for them to show that pride. That negativity and that complacency created a mask. We were removing the mask and this pride of New Mexico was there.”

The foundational ideas behind what made New Mexico United successful, though, are a continuation of what has allowed other clubs around the Championship to thrive. Starting with Sacramento Republic FC’s arrival in 2014, the ability to tap into the feeling of what it means to be from a certain city or region has been a key factor for numerous clubs in the Championship and League One, and Patel believes the values that make the Rio Grande Valley unique will be the foundation on which the Toros can build.

“Down here, we’re often between the lines as they call it,” said Patel. “I talk to people all the time – and I’ve been doing that a lot this year – and people say, ‘you know, sometimes I’m not quite Mexican enough, and I’m not quite American enough, I’m somewhere between the lines.’ So as a club I see that as an opportunity in how do we give this population the team that allows them to show their pride and play for them and represent them?

“Going back to that question that I get a lot – what was the secret sauce? – I’ll tell you what the secret sauce is. It’s the people, the proud people of a geographic area that need an outlet to show their pride. It’s our job to steward that. I think we did that well in New Mexico with some incredibly talented people, some of which are still there, some of which have moved on, and now I see a huge opportunity here in the Valley because I see this set of the population that is so proud to be from the Valley. How do we, through football, give them that outlet to express that?”

Creating an identity that resonates with supporters is a key first step, but for a club like the Toros the expectation of success on the field could be the biggest driver to the club achieving its aim of packed stands and a vibrant atmosphere at H-E-B Park.

That means Patel’s next big decision could be the most important he’s made since arriving in the Valley. The appointment of the club’s new Head Coach – the first that will be made by the RGVFC front office as opposed to the Houston Dynamo’s technical staff – offers the chance to set the table for who the Toros will be in 2021. That means the pressure is on to bring in the right person to deliver success on the field.

Having gone through coaching searches personally at USL League Two’s Albuquerque Sol F.C., and at New Mexico United – where CEO and Owner Peter Trevisani had the ultimate call – the experience for Patel has been an invigorating one, even as he knows how high the stakes are that he gets the decision right.

“There’s truly nothing more educational than going through the process yourself and being the decision-maker for what this position will be and how significant it is,” he said. “You never get a second chance to make a first impression and this new Head Coach that we’re going to hire, in a way we’re looking at it as Toros 2.0. This is our chance to make a great first impression with the quality of football that we play, so it’s a lot of pressure in that.

“I smile a lot when I think about it because it helps you learn about so many different coaching styles, so many different coaching personalities and cultures, and I’ve really enjoyed going through this process. I hate it because you can only hire one. … While I do work for our owner, ultimately, I think I work for the people of the Rio Grande Valley. It’s their coach that I’m making the decision on, so it needs to be the best person for those people.”

The decision may be coming soon. The Athletic’s Jeff Rueter reported on Tuesday that among the finalists for the position is the Toros’ first Head Coach, Wilmer Cabrera, who led the side to its lone prior postseason berth in its inaugural season in 2016. Whoever lands the job, though, is going to be expected to not only put in the work on the field to make the Toros a success, but also off the field as Patel and his team look to build the club’s visibility throughout the region.

As RGVFC’s partnership with the Dynamo changes, the Toros now enter an era in which they are in control of their destiny, on and off the field.