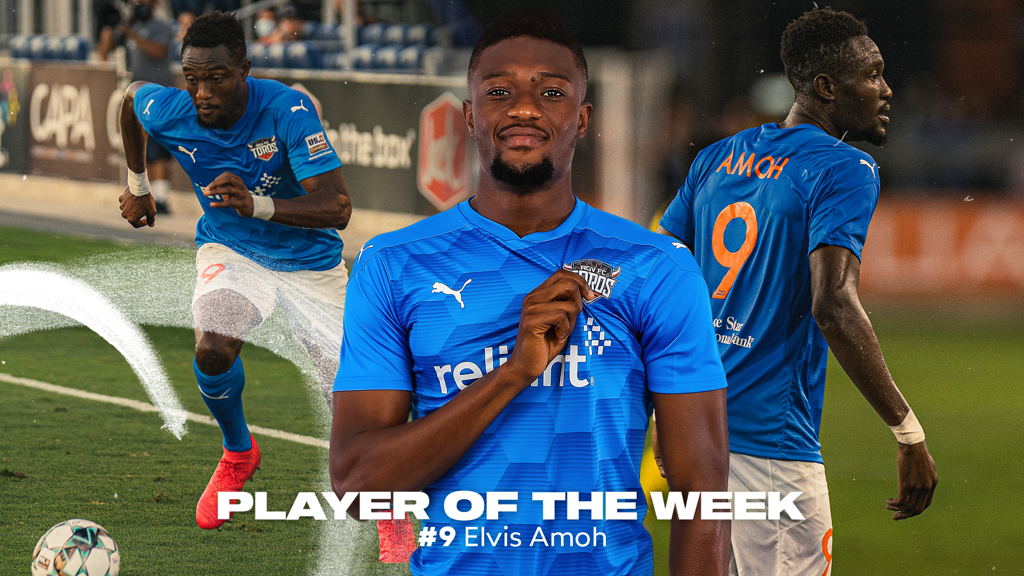 TAMPA, Fla. – The USL Championship announced the Team of the Week Presented by Cleer Audio for Week 7 of the 2021 regular season on Tuesday, with Rio Grande Valley FC’s Elvis Amoh voted Player of the Week after he scored the second hat trick in the club’s history to lead a 4-2 victory against Miami FC on Sunday night at FIU Stadium.

One of the numerous new arrivals for the Toros this season, Amoh led the side’s comeback from a two-goal halftime deficit to take victory in Miami. The Ghanaian forward hit the crossbar in first-half stoppage time but struck in the 51st minute to get the Toros on the board and added a second 15 minutes to go. The 29-year-old then capped his hat trick in second-half stoppage time to ice the game, recording the first hat trick for RGVFC since Michael Salazar on April 24, 2019 against the LA Galaxy II.

Amoh earned 69 percent of the ballot for his performances to earn the award. Hartford Athletic’s Danny Barrera finished second on 19 percent after recording one goal and three assists for his side as it took a club-record 7-0 win against the New York Red Bulls II on Saturday night at Dillon Stadium.

The Championship’s Player of the Week is selected by the USL National Media Panel, which is made up of representatives from each media market in the Championship.

GK – Alec Kann, Atlanta United 2: Alec Kann recorded a seven-save shutout including a late penalty kick save to deny Louisville City FC’s Niall McCabe as Atlanta took a 1-0 victory on Sunday night, its first against LouCity in its history.

D – Robert Coronado, OKC Energy FC: Robert Coronado provided the assist for Energy FC’s game-tying goal in a 1-1 draw against Indy Eleven, and went a perfect 11 of 11 in duels while completing 3 of 3 dribbles and making four interceptions.

D – Macauley King, El Paso Locomotive FC: Macauley King provided the assist on Locomotive FC’s goal in its 1-0 win against Austin Bold FC on Thursday night, and completed 67 of 78 passes while winning 2 of 3 tackles and 5 of 8 duels.

M – Laurent Kissiedou, Memphis 901 FC: Laurent Kissiedou recorded one assist and two key passes, completed 27 of 31 passes overall and won 7 of 10 duels as 901 FC claimed a 2-1 victory on the road against Indy Eleven on Saturday night.

F – Elvis Amoh, Rio Grande Valley FC: Elvis Amoh scored the second hat trick in Toros history to lead a second-half comeback for the visitors in a 4-2 win against Miami FC, while finishing the night with five shots.