Toros vs. Rayados will take place on March 22 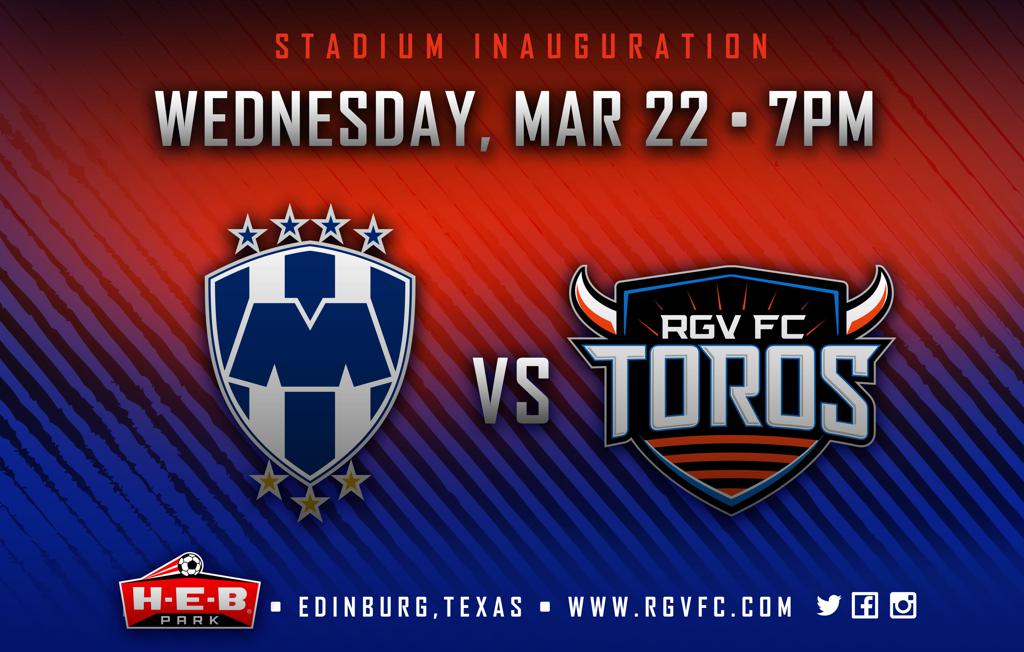 The Rio Grande Valley FC Toros will be hosting Club de Futbol Monterrey on March 22. The game will act as the inauguration game for the new H-E-B Park and will kick off at 7p.m.

Rayados, as C.F Monterrey is commonly known, boasts a large fan-base and is one of the top teams from Liga MX. The team has won the Mexican league championship a total of four times. From 2010 to 2013, Rayados was crowned champions of the CONCACAF Champions League three times consecutively. Current squad players include Carlos Sanchez, Edwin Cardona, Dorlan Pabón, and Alfonso Gonzalez, a Reynosa born player who played in the youth soccer system in the Rio Grande Valley.

Led by head coach Othoniel “Junior” Gonzalez, the Toros will play their first ever international friendly.  The match will be a historic milestone for the club and for H-E-B Park. After reaching playoffs in their Inaugural season, the RGV FC Toros will seek to build on their success.

The stadium’s inauguration game is an example of the level of play and entertainment that H-E-B Park seeks to provide to the community. “We are more than excited to inaugurate our H-E-B Park with an international friendly against a renowned team like Rayados,” explained RGV FC Toros President Bert Garcia. “One of the goal’s of the organization is to provide first-class entertainment to the Rio Grande Valley and we can not wait to see the support of the community in the stands.”

The friendly game will be the first game to be played at the 9,700-capacity stadium. Complete with full-kitchen concessions, an amphitheater, and luxury suites, H-E-B Park will lead the league in infrastructure. The friendly vs. Rayados will be the last game the Toros play before starting the 2017 season against in-state rival San Antonio FC.

Tickets for the friendly match will go on sale Friday, February 17. Tickets can be purchased online at RGVFC.com and HEBParkRGV.com. For more information, call (956) 972-1144.

RGV FC Toros 2016 USL game credentials will NOT be valid. To request a credential to this match and the Toros 2017 USL season,open the form below or e-mail anwar@rgvfc.com .